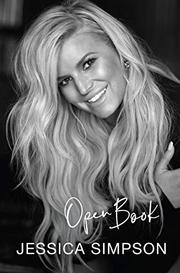 The debut memoir from the pop and fashion star.

Early on, Simpson describes the book she didn’t write: “a motivational manual telling you how to live your best life.” Though having committed to the lucrative deal years before, she “walked away,” fearing any sort of self-help advice she might give would be hypocritical. Outwardly, Simpson was at the peak of her success, with her fashion line generating “one billion dollars in annual sales.” However, anxiety was getting the better of her, and she admits she’d become a “feelings addict,” just needing “enough noise to distract me from the pain I’d been avoiding since childhood. The demons of traumatic abuse that refused to let me sleep at night—Tylenol PM at age twelve, red wine and Ambien as a grown, scared woman. Those same demons who perched on my shoulder, and when they saw a man as dark as them, leaned in to my ear to whisper, ‘Just give him your light. See if it saves him…’ ” On Halloween 2017, Simpson hit rock bottom, and, with the intervention of her devoted friends and husband, began to address her addictions and underlying fears. In this readable but overlong narrative, the author traces her childhood as a Baptist preacher’s daughter moving 18 times before she “hit fifth grade,” and follows her remarkable rise to fame as a singer. She reveals the psychological trauma resulting from years of sexual abuse by a family friend, experiences that drew her repeatedly into bad relationships with men, most publicly with ex-husband Nick Lachey. Admitting that she was attracted to the validating power of an audience, Simpson analyzes how her failings and triumphs have enabled her to take control of her life, even as she was hounded by the press and various music and movie executives about her weight. Simpson’s memoir contains plenty of personal and professional moments for fans to savor. One of Kirkus and Rolling Stone’s Best Music Books of 2020.

An eye-opening glimpse into the attempted self-unmaking of one of Hollywood’s most recognizable talents.