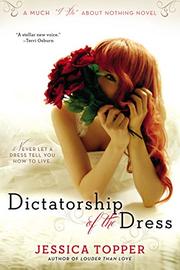 DICTATORSHIP OF THE DRESS

Former Marvel Comics illustrator Laney Hudson isn't thrilled about having to transport her mother’s wedding gown from New York to Hawaii as carry-on luggage. Naturally, though, when people see a woman lugging a wedding gown, they're going to assume she's the bride, which Laney uses to her advantage to get bumped to first class on the first leg of her journey, from New York to Chicago. Seated next to her is Noah Ridgewood, a software designer with an acute fear of flying and a demanding socialite fiancee who's giving him a serious case of cold feet. When a flight attendant mistakenly announces Laney’s and Noah’s pending nuptials with a champagne toast, they have no choice but to ride out the charade until they land in Chicago. From there, they will surely go their separate ways. His destination is Vegas, where his bachelor party is already underway, and she has miles to go before she can watch her mother get married on Waipouli Beach. Fortunately, a bad storm grounds both of their connecting flights, giving Laney and Noah more time to get to know each other. Their interactions evolve in a typical arc, starting with faintly antagonistic banter and ending with intimate epiphanies, but Laney and Noah are unique, likable characters worth rooting for as they fall in love and try to overcome the complications of their situation. At the end of their magical layover, Noah still needs to contend with his fiancee, Sloane, who is also the boss’s daughter, and Laney still has to face her own romantic past: a turbulent relationship with her rock drummer boyfriend who suffered an untimely death. And let’s not forget Laney’s mother, waiting in Hawaii for her wedding dress.

Though sometimes the language isn't as witty or romantic as it's trying to be, Topper makes good use of the dress as a plot device and infuses enough fun and suspense into the rollicking storyline to make it a satisfying read.