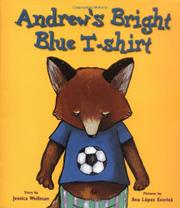 Clothes make the man, or in this case a young fox, in newcomer Wollman’s tale of an identity stitched into the fabric of a hand-me-down shirt. Andrew’s brother Ernie has given him a bright-blue T-shirt emblazoned with a soccer ball. Andrew worships his older brother and his prowess on the soccer field. He looks forward to the day when he is big enough to join him. For the time being, the shirt will serve as his hopes and dreams and he never intends to take it off (though his mother does demand washing it once a week). But Andrew is growing and the T-shirt isn’t. Soon enough his belly is poking out. Still, Andrew isn’t about to forsake his talisman; it might look comical, yet it has just the kind of mojo needed as he practices his dribbling, blocking, and kicking that he has seen his brother do out on the field. Comes the day when Andrew has a chance to show his soccer skills; all that practice and all that growing has given him what it takes, and it has also given him the security to doff the T-shirt: no epiphany, simply the realization—and the kind of positive reinforcement conducive to such a gesture—that it is time to move on. Lopez Escriva’s (Please Do Feed the Bears, p. 738, etc.) homey art gives Andrew the right measure of credulity and determination. (Picture book. 3-6)