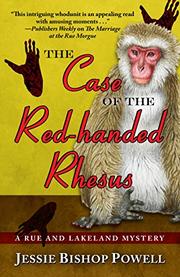 THE CASE OF THE RED-HANDED RHESUS

A pair of post-honeymoon primatologists faces unexpected domestic challenges along with a couple of corpses.

The new normal for longtime lovers and colleagues Noel Rue and Lance Lakeland includes a new marriage, a new house, and a 15-year-old foster daughter, Natasha. True, the old normal (The Marriage at the Rue Morgue, 2014) hadn’t been all that stable either, especially with the murder of a friend who was the director of the Midwestern primate sanctuary Noel and Lance are trying to keep afloat. Natasha’s grandfather, Stan, has bought a house for them and Tasha while he and his wife are in long-term nursing care. Tasha, a survivor of a child-porn ring, is just beginning to feel safe when her half brother, William, goes missing. Even after he’s found, he’s unable to describe clearly what happened to him because he’s autistic. Worried that the boy and his twin sister, who’s also autistic, are about to be sucked back into the foster-care system that’s repeatedly let them down, Noel and Lance decide to adopt the twins, despite the risks. One of these is their father (and Tasha’s, too), a drug-dealing gangbanger who keeps his business going even from prison. On top of everything else, Chuck the orangutan keeps getting loose and liberating the sanctuary’s mysteriously rising population of rhesus macaques. Federal agents who broke up that porn ring are convinced that Noel, Lance, and their family are targets. The appearance of a bodiless head at the sanctuary and the headless body at a very important job interview suggests that the feds may be right.

Even returning readers will need the refresher course that Powell offers in aid of a criminal plot that’s inextricably tangled with that of its predecessor. The complementary plot involving the children, while touching, means a long, slow buildup that leaves you expecting either a family drama or a whimsical whodunit.