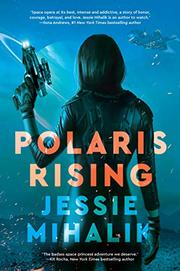 Mihalik debuts with the first book of a science-fiction trilogy filled with high-tech action, political intrigue, and steamy romance.

Two years ago, Ada von Hasenberg, fifth daughter of the powerful von Hasenberg House, fled the life her father arranged for her: a political engagement to a rival House in order to spy on her husband-to-be. Using all her von Hasenberg training—a skill set that includes hacking, combat, and social manipulation—Ada ran. But when she's captured by bounty hunters eager to claim her father's reward, Ada meets their other prisoner: a dangerous murderer named Loch. Loch's personal magnetism draws Ada even as his violent reputation makes her wary. But when her jilted fiance, Richard Rockhurst, intercepts the bounty hunters' ship, Ada must ally with Loch whether she trusts him or not. Together, they escape Richard and make it to a frozen backwater planet, but Richard pursues. As they evade his men and plan a way to get off-world, Loch and Ada start to trust each other—something that comes naturally to neither of them. When Loch is captured, Ada rescues him with the help of her new ally, a fence named Veronica. The three of them pull off an audacious theft of Richard's ship—and discover that it has technological secrets that could change the balance of power for everyone. The ship isn't the only thing with secrets: Loch's mysterious past threatens the highest levels of government. To save her new (and old) friends, as well as her House, Ada will need to exercise all her ingenuity and ruthlessness and play the political game like the thing she least wants to be: a von Hasenberg.

Fast-paced space opera, filled with daring rescues and blaster fire, thrown into high gear by the passionate romance between the lead characters.