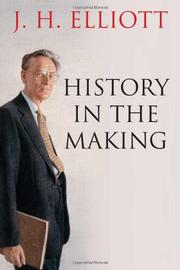 HISTORY IN THE MAKING

A notable British historian’s memoir about his early attraction to the study of imperial Spain and the changing historical methodology since the 1950s.

Impressed by a visit to the Prado in 1950 as a student at Cambridge, Elliott (Modern History Emeritus/Oxford Univ.; Empires of the Atlantic World: Britain and Spain in America 1492–1830, 2006, etc.) resolved to immerse himself in Spanish history. The 17th century is considered the Golden Age for Spain, as well as the beginning of its decline in imperial power. In the 1950s, in the throes of Franco’s grim dictatorship, few historians in Britain wanted to study there, leaving the field wide open. Elliott welcomed the sense of “difference” he felt from the Catholic Iberian experience, and he soon found in the 1640 Catalan rebellion his first lode of research material and fuel for dissertation. Under Franco, the country was smothering under an “authoritarian straitjacket” not unlike the influence Castile wielded over its regional dominions in the 17th century, and Elliott found a poignant, natural sympathy for the oppressed Spanish. In these well-composed essays, the author re-creates his intellectual journey as a historian, his ability to regard Spanish history in a fresh light, free from stereotypes, and his growing reputation as “something of an iconoclast.” Elliott’s essential flexibility led him down welcome and unexpected paths, such as in “transnational history”—the tracing of currents simultaneous in other parts of Europe, especially in England—and in comparative history and biography. The author’s deep, wide erudition in an age of increasing specialization is impressive and accessible for all students of history.

A straightforward, lucid introduction to Elliott’s significant body of work.