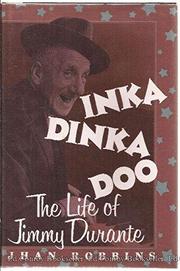 The Life of Jimmy Durante

A vast improvement over Robbins's earlier bios of Yul Brynner, James Stewart, and Billy and Ruth Graham, largely because Durante (1893-1980) was such a greathearted, lovable man with his giant schnozzola and his witty ``moiderin'' of the English language. Durante got his nose from his mother, who bore him on a kitchen table in Brooklyn (`` `Holy Smokes!' yells da neighbor lady whose deliverin' me. 'Dis ain't da baby, it's da stork!' ''). He early showed a mastery of the piano (``My father thought I'd become a concert piano player like that Russian guy, Sir Rockinoff'') but was diverted from the classics to playing ragtime and jazz in Coney Island bawdy houses. Soon, Durante married Jeanne Olson, a singer, who guided him into better jobs. His career spanned nightclubs and speak-easies, Broadway, Hollywood, radio, records, and TV, and included two comebacks. His early films are forgettable turkeys, his successes Jumbo and It's a Mad, Mad, Mad, Mad World. In nightclubs Durante began telling more and more jokes to establish that he was the leader of the band, yelling, ``Stop the music!'' and erupting with a comical outburst. But the greater his successes, the more his wife drank, feeling alienated from Durante, who attracted the Broadway greats. After 22 years of marriage, Jeanne died of a heart ailment and alcoholism. Remarrying at age 67, Durante and his second bride, 39, adopted a girl. Later, after a stroke felled the actor, his friends attested that there was something in him that brought out the best in them. Durante died at age 86. Swift but moving, light but not thin. (Photographs.)