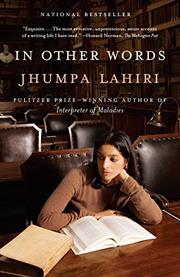 In a perfectly titled memoir, the Pulitzer Prize–winning novelist chronicles her efforts to learn and write Italian.

Lahiri (The Lowland, 2013, etc.), who wrote and published her text in Italian in 2015, now presents an English translation (by Goldstein) with Italian and English on facing pages. For Lahiri, Italian was her third language—her mother spoke Bengali—and she relates in engaging detail the reasons she felt drawn to Italian, her many difficulties learning it, her struggles with writing, and her move to Rome to write. As she acknowledges near the end, and suggests elsewhere, her work is thick with metaphor; continually, she tries to find effective comparisons. A swim across a lake, an avalanche, a mountain-climb, a journey, a map, a bridge, maternity—these and numerous others describe her learning and her difficulties. A most affecting later chapter, “The Wall,” deals with a discomfort felt (and caused) by many: Lahiri doesn’t “look” Italian, so Romans and others treated her oddly, even insultingly, at times. She notes that similar experiences happened in the United States. Even though she’s known English since childhood—and has written award-winning novels in the language—some Americans look at her with a kind of mistrust. Lahiri does not ever get too detailed about the specifics of her learning, although there are paragraphs about vocabulary, grammar, and pronunciation. She is more interested in the effects of all of this on her writing and on her identity. Her memoir is also chockablock with memorable comments about writing and language. “Why do I write?” she asks. “To investigate the mystery of existence. To tolerate myself. To get closer to everything that is outside of me.” At the end, she returns to America but wonders if she will now write again in English.

An honest, self-deprecating, and very moving account of a writer searching for herself in words.