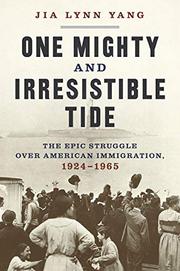 ONE MIGHTY AND IRRESISTIBLE TIDE

The Epic Struggle Over American Immigration, 1924-1965

A history of the struggle for immigration law reform in 20th-century America.

In this excellent debut, Yang—a deputy national editor at the New York Times who was part of a Washington Post team that won a Pulitzer Prize for their coverage of the ties between Donald Trump and Russia—recounts the making of the historic Immigration and Nationality Act of 1965, which opened the door to Asian, Latin American, African, and Middle Eastern immigrants and “helped define America as a multicultural nation.” Until then, becoming an American was tied to European ancestry, with entry barred to nearly all Asians. In a lively, smoothly flowing narrative based on archival research, the author describes the “racial paranoia” of the 1920s, marked by the reemergence of the Ku Klux Klan, the continued popularity of Madison Grant’s The Passing of the Great Race, and the surge in eugenics. Anti-immigration sentiment led to a restrictive 1924 law, which deliberately cut immigration under quotas based on the number of foreign-born Americans in 1890. In ensuing decades, writes the author, restrictions continued, with concerns over communist infiltration by immigrants growing more important than the desire to control the race and nationality of Americans. By the 1950s, a “coalition of the powerful and powerless,” led by Congressman Emanuel Celler and including families of interned Japanese Americans, argued for immigration in the more conducive climate engendered by increasing celebration of the immigrant past, the scholarship of historian Oscar Handlin (The Uprooted), and politicians’ eagerness for urban ethnic votes. By then, even organized labor supported immigration. Throughout her important story, Yang highlights human and political drama, from the histrionics of racists to the political machinations of Harry Truman, John F. Kennedy, and Lyndon Johnson on behalf of the displaced and others. The author also reveals the roles of unsung heroes like White House aide Mike Feldman, who shaped JFK’s message in A Nation of Immigrants. Yang illuminates the little-known, “transformative” 1965 law that spurred demographic changes expected to result in a nonwhite majority in America within a few decades.