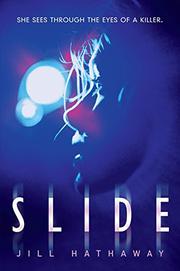 Pink-haired, rebellious Vee isn’t really narcoleptic, as everyone believes; when she suddenly falls asleep, she “slides” into other people and sees through their eyes in this intriguing mystery.

Vee’s unwanted paranormal ability becomes a serious problem when she witnesses a murder, but she doesn’t know through whose eyes she’s seeing. She does know that no one will believe her if she tries to explain, especially not her physician father. The police and everyone else believe the murder victim committed suicide. When yet another apparent suicide occurs, Vee begins to suspect two people she trusts, her best friend, Rollins, and her cool psychology teacher. Could either be the murderer? Rollins appears to back away from her when Vee falls for handsome newcomer Zane in the well-crafted romance subplot, and she worries that the teacher might be too close to his female students. High-school rivalries complicate the issue. Although the paranormal aspects of this book pale before its unfolding mystery and human drama, the mystery plot turns on Vee’s sliding ability. Alas, the solution seems to pop out of nowhere, but the back story to the mystery adds real depth. Hathaway guides readers through family turmoil, integrating it well with her murder mystery. She makes Vee’s unwanted ability seem quite real, but it is the history of family betrayal that finally takes center stage in this above-average mystery.