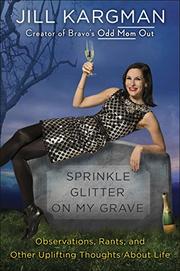 SPRINKLE GLITTER ON MY GRAVE

Observations, Rants, and Other Uplifting Thoughts About Life

One woman’s quirky perspective on life.

The creator of Bravo’s Odd Mom Out, Kargman (Sometimes I Feel Like a Nut: Essays and Observations, 2011, etc.) dishes out a variety of essays that poke fun at herself, her family, friends, and the world in general. Short, acerbic, and sometimes laugh-out-loud funny, the narratives come from her experiences as a teen, a wife, a mother, and from observations of the world around her. In “Orlandon’t,” she covers the multiple reasons not to take your child to Disney World: the color scheme, the endless lines, the expensive and tacky merchandise, etc. She writes about things that irk her—children in leopard leggings, identical twins who are dressed alike, tapas bars, “people in the audience at the Oscars who clap harder for some dead people than other dead people”—but also offers sweeter pieces such as her celebration of her mother’s words of wisdom. Her humor is often laced with expletives and slang terms, adding a hipster attitude that’s not really needed to achieve the level of humor she’s striving to reach. If you want to know how she and her family got coveted plots in a cemetery on Nantucket, read “Dying to Get In.” Curious to know who she’s had a lifelong crush on? “You’re the One that I Want.” Ever wonder what a stripper class is like? Kargman attended one and lets you know what she thinks. Everything is fair game as the author babbles about the difficulty of getting her son into kindergarten in New York, why her family resembles the Munsters, being a Jewish child and attending summer camp in Maine, questions she poses to the universe, her love of Thanksgiving, or euphemisms she’s invented. The collection is an odd mix best read in short spurts. Prepare to laugh, but then move on, as this fluff is not very filling.

Snarky, unconventional humor that pokes fun at just about everything.