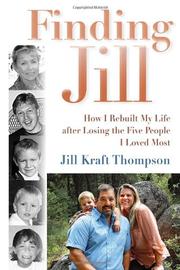 How I Rebuilt My Life after Losing the Five People I Loved Most
by Jill Kraft Thompson
BUY NOW FROM
AMAZON
BARNES & NOBLE
LOCAL BOOKSELLER
GET WEEKLY BOOK RECOMMENDATIONS:

Kraft Thompson’s debut memoir recounts the horrific deaths of the five people she loved most and her long road to recovery.

In 2002, on a busy interstate in Italy, a semi lost control, crossed a median and smashed into Kraft Thompson’s minivan. Her husband, two sons, mother and niece were killed. She and her sister survived. The author suffered many injuries, but her physical recovery paled in comparison with the long struggle toward emotional healing. “The echoes of my life with my family were deafening,” she says. “And when I wasn’t hearing them, I was left to silently wonder how on earth I could go on without them.” Kraft Thompson had married her husband, Bart, after a whirlwind 11-month romance. The couple eventually became parents of two sons. When Bart was offered a chance to work at his company’s plant in Avezzano, Italy, the family relocated for a year. As she was boarding the plane, Kraft Thompson had one of her many premonitions: “I’m not going to come home with them.” Once in Italy, the “many wondrous sights” and “fascinating history” absorbed them all and quieted her fears. The often bland descriptions of the author’s travels, however, don’t evoke the landscape. More satisfying is the inclusion of friends’ and relatives’ memories following the accident and excerpts from the journal Kraft Thompson kept throughout her recovery. The book also includes touching, informative photos that make the story more immediate. She documents her attempted suicide as a “wake-up call” that forced her to choose between the road of misery or “some new road I couldn’t imagine but had to believe was out there.” Through therapy, music, ceramics, a new pet, humor, faith and the constant support of friends, Kraft Thompson began to open her heart again. She met and eventually married John, a man who accepted her past trauma and embraced her deceased family as a part of his own. Six years after the accident, Kraft Thompson gave birth to a boy named Franklin. “Today I live parallel lives,” she writes. “One is the life of a person struggling endlessly with grief, the other is the life of a wife and mother loving each day she has with her family.”

A memoir that gives hope to those suffering from loss as well as guideposts on the road to recovery, as tenuous as it may be.