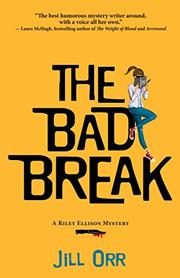 When a fun but flawed obituary writer investigates her subject, she finds that his death might not be as straightforward as she thought.

The first person Tabitha St. Simon calls when she finds the body of her future father-in-law, Dr. Arthur Davenport, is Riley Ellison, her former co-worker at the Tuttle Corner Library and the Tuttle Times’ latest obituarist. Tabitha’s less concerned with what Riley will write than with what Riley might do for her. She’s seen Riley do some solid informal investigating recently (The Good Byline, 2017), and she’s certain that Riley can clear her fiance, Thad, of complicity in Arthur’s murder, even if it’s Thad’s knife sticking out of Arthur’s chest. Riley isn’t close with bridezilla Tabitha, but she knows that if she wants to give Arthur’s obituary the time and thought it deserves, she should learn all she can about him, especially if that might promote her story from the obituary section to the front page. And Riley welcomes the distraction from her personal life. She’s known around town as the girl whose boyfriend, Ryan, left after years together only to knock up the first girl he met, beautiful and improbably named Ridley, and now both Ryan and Ridley are back in town. Ridley is settling in to give birth any day; Ryan, dedicated enough to future fatherhood, claims that Ridley was a blip and is desperate to get Riley back. Riley’s not interested in giving Ryan a second chance, partly because she can’t believe anyone would leave the perfect Ridley, partly because Riley has a real relationship of her own. Now that she’s been set up with Jay via the hilariously overbearing and invasive matchmaking service Click.com, the two are living their best millennial lives together, evidenced by Riley’s accidental and automatic enrollment in Bestmilleniallife.com, which has brought her together with Personal Success Concierge™ and Beyoncé enthusiast Jenna B.

The laughs keep coming with Riley and her network of all-but-unbelievable co-stars, though the mystery plot could be trimmed without abating the otherwise high shine.