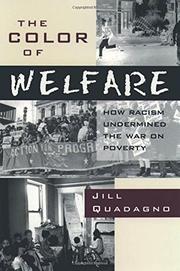 THE COLOR OF WELFARE

How Racism Undermined the War on Poverty

A pointed reinterpretation of the history of antipoverty policy, arguing that racism most explains why our welfare state is feeble compared with other industrialized nations. Quadagno (Sociology/Florida State Univ.; The Transformation of Old Age Security, not reviewed) proceeds with several case studies, which could have used a bit of leavening with political context and journalistic verve. The author notes that black agricultural workers and domestic servants were denied Social Security protection because of white political opposition in the Roosevelt era. Similarly, New Deal programs seeking to bolster the housing market actually reinforced housing segregation. The Office of Economic Opportunity, the main engine of Lyndon Johnson's War on Poverty, didn't receive enough funding, nor did it establish a policy of redistribution, the author notes. Her discussion of government job-training programs and affirmative action, in which she attacks William Julius Wilson's well-known critique of group rights, is not fully convincing; nor does it address some latter- day issues like the ``race-norming'' of job tests. More potent is her analysis of federal housing policy, which in the 1980s retreated from its commitment to subsidizing housing for the poor. Also, she shows how Richard Nixon's Family Assistance Plan, which promised a guaranteed annual income to the poor, threatened Southern political and business powers, who led the political opposition. She does suggest that the country's lack of commitment to universal child care can be blamed less on racism than on general social conservatism. In the end, Quadagno establishes that the US, compared to other industrialized nations, does the least to fight poverty. However, she would have set the stage better for discussion of solutions had she mentioned America's changing multiracial landscape, debates about the impact of culture on poverty, and current proposals for such policies as workfare. Mainly for students and policy wonks.