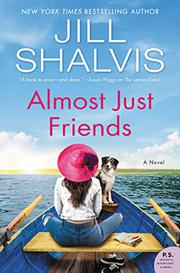 Piper Manning is determined to sell her family’s property so she can leave her hometown behind, but when her siblings come back with life-changing secrets and her sexy neighbor begins to feel like “The One,” she might have to redo her to-do list.

As children, Piper and her younger siblings, Gavin and Winnie, were sent to live with their grandparents in Wildstone, California, from the Congo after one of Gavin’s friends was killed. Their parents were supposed to meet them later but never made it. Piper wound up being more of a parent than her grandparents, though: “In the end, Piper had done all the raising. It’d taken forever, but now, finally, her brother and sister were off living their own lives.” Piper, the queen of the bullet journal, plans to fix up the family’s lakeside property her grandparents left the three siblings when they died. Selling it will enable her to study to be a physician’s assistant as she’s always wanted. However, just as the goal seems in sight, Gavin and Winnie come home, ostensibly for Piper’s 30th birthday, and then never leave. Turns out, Piper’s brother and sister have recently managed to get into a couple buckets of trouble, and they need some time to reevaluate their options. They aren’t willing to share their problems with Piper, though they’ve been completely open with each other. And Winnie, who’s pregnant, has been very open with Piper’s neighbor Emmitt Reid and his visiting son, Camden, since the baby’s father is Cam’s younger brother, Rowan, who died a few months earlier in a car accident. Everyone has issues to navigate, made more complicated by Gavin and Winnie’s swearing Cam to secrecy just as he and Piper try—and fail—to ignore their attraction to each other. Shalvis keeps the physical and emotional tension high, though the siblings’ refusal to share with Piper becomes tedious and starts to feel childish.