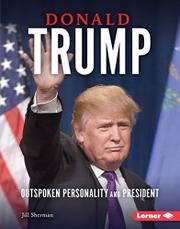 From the Gateway Biographies series

A quick scan of the recently elected chief executive’s family, background, and campaign.

Between tacked-on mentions of her subject’s win (sans numbers or electoral maps) at the open and close, Sherman retraces the rise of the Trump fortune. She begins with the immigration of his grandfather Friedrich Drumpf to the U.S. in 1885, then continues to his transition from casinos and other real estate ventures (and reality TV celebrity) into politics, and concludes with his campaign. Though frank enough to mention Marla Maples and his multiple marriages, the author passes in silence over Trump’s many bankruptcies and slicker financial dealings. She even manages to put positive spins on his M.O. (“Donald understood that this hard work and ability to make deals were the keys to his success”) and his “bold and controversial” campaign statements: “He thought it was important to state his views honestly.” Those views are presented only in summary form, without comparison or analysis, and his formal debates with rival Hillary Clinton are confined to a reference to Benghazi. The account is interspersed with staid news photos, and it ends on election night with a generic comment that the world is watching to “see what President Trump will do next.”

A prefab profile that will be outdated long before it becomes available.