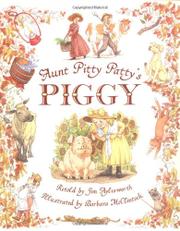 Aylesworth and McClintock (The Gingerbread Man, 1998) tackle the story of the old woman whose pig won’t go over the stile, hindering her from going home. Here, the fat piggy is purchased at the market, but when it arrives home, it won’t go through the gate. The old woman, in this case Aunt Pitty Patty, enlists her young niece Nelly to go fetch help. Nelly implores a dog to bite the pig, a stick to hit the dog, a fire to burn the stick, water to douse the fire, etc. All the while, the piggy is parked by the gate reciting, “No, no, no, I will not go.” Aylesworth’s addition of the rhyming refrain preserves some of the cadence of the traditional tale, while softening the verbs (“hit” instead of “beat,” the rope “ties” instead of “hangs,” the butcher is to “scare” instead of “kill”) usually associated with it. McClintock emphasizes expression over action, and employs the same dainty brown line and soft watercolor wash of this team’s previous book. (Picture book/folklore. 3-7)