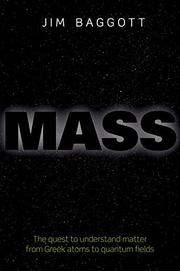 The Quest to Understand Matter from Greek Atoms to Quantum Fields

An imaginative book that seeks the answer to the question, what is matter?

The answer is definitely not simple, but veteran British science writer Baggott (Origins: The Scientific Story of Creation, 2015, etc.) has done his homework, and science-minded readers will enjoy the result. He begins with the revolutionary philosophers of ancient Greece, who thought deeply and concluded that matter consists of tiny atoms that move about in a void and combine to produce everything we see and experience. For more than two millennia, the concept of the atom remained an object of metaphysical speculation. Then, a few hundred years ago, the first scientists began to tease out more useful facts on the subject. By 1800, chemists understood that matter could be divided until it couldn’t; these were elements (iron, oxygen, carbon). After 1800, realizing that elements combined in simple whole numbers—two hydrogen and one oxygen become one water molecule—scientists theorized that elements consisted of invisibly small atoms. Skeptics disagreed, and it was not until 1905 that Einstein suggested the experiment that proved atoms exist. Then further complications arose. It turns out that matter is another form of energy (Einstein again); atoms are not indivisible but made up of particles, many of which contain little matter. Thus, three quarks making up a proton provide 1 percent of its mass, while the rest is energy. Recent advances suggest that matter is simply an alteration in a quantum field that gives rise to inertia. “In this alternative interpretation,” writes Baggott, “mass is not an intrinsic primary property of material substance; it is, rather, a behavior. It is something that objects do rather than something they have.” Readers not paying close attention will scratch their heads.

Baggott provides a wild but expert and comprehensive ride; readers will agree that while we have learned a great deal about matter, we still don’t understand it.