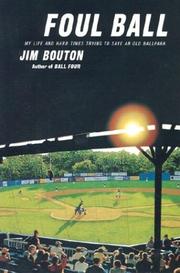 My Life and Hard Times Trying to Save an Old Ballpark

When it comes to baseball parks, writes Bouton, “ ‘If we build it, they will come’ has evolved into ‘If we don't build it, they will go,’ ” referring to the rash of new, economically dubious stadiums. Pittsfield's Wahconah Park, built in 1892, one of the oldest in the US, was about to become another of these statistics, until Bouton and his comrade-in-arms Chip Elitzer decided to offer an alternative to the $18.5-million, pork-barrel proposal for a new stadium: “We'll spend private dollars to renovate an existing ballpark for a locally owned team.” Bouton—as zealous to entertain his readers with tangy one-liners as he is in uncovering the myriad corruption, deals, and fixes that attended the drive for a new stadium—adroitly manages a number of stories at once. There’s the backroom power-brokering, ego-strutting, and just plain greed of making taxpayers foot the bill for a stadium they have time-and-again voted down in referendums; the historic importance of old ballparks, with their quirks and intimacy and evocation of the game's past; and an environmental subplot: the land being touted for the new stadium may be a toxic dump. Capping it with a ballpark would put paid to the millions of dollars it would cost to clean it up. (Bouton points fingers, too, at other infamous polluters—General Electric, for instance. After a GE lawyer was set to invest in PublicAffairs, Bouton's intended and enthusiastic publisher, PublicAffairs suddenly requested that the GE material be excised. Bouton smelled a rat—et voilà: a self-published work.)

A good, if at times windy, story. Even if his proposal got smothered by the small-city political weight, he got the voice of Pittsfield's regular folk heard and the ballpark saved, for now.