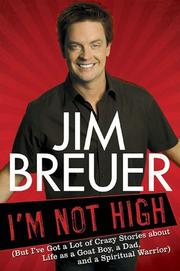 (But I've Got a Lot of Crazy Stories About Life as a Goat Boy, a Dad, and a Spiritual Warrior)

Saturday Night Live alum Breuer chronicles a life in comedy and a life with God.

“All of my life,” writes the author in his first book, “humor had been a natural default operating mode for me,” and that God had given him the gift to make people laugh so that he might help and heal. His early years read like a stock bio for a comedian: making the neighborhood kids laugh growing up on Long Island, desultory attempts at college mixed with odd jobs, all the while struggling as a stand-up comedian, performing whenever and wherever he could. He had minor success on television with the show Uptown Comedy Club (which also featured Tracy Morgan) and was hired for a sitcom with the enigmatic Dave Chappelle and promptly fired. Then came SNL. Here the book starts to come alive as the author recounts his efforts to compete with a gifted and hungry cast. Breuer provides mostly generous portraits of his fellow cast members, and notes that he didn’t become a star on the show until he came up with an imitation of Joe Pesci as a talk-show host and developed the decidedly odd character of “Goat Boy.” One night, Chris Farley, guesting on the show at the height of his fame, called Breuer, asking sadly and pitifully, “Am I funny?...Am I just the fat, dumb guy?” Farley would soon be dead, and Breuer regretted not trying harder to save him. Other successes followed SNL, including a well-known role as a stoner in the Chappelle vehicle Half Baked (1998), but Breuer felt he should do more than just be funny. Conversations with Steve Harvey and, later, Bill Cosby—encounters he took as signs from God—convinced him that his family, everyday life and faith could be the stuff of comedy. At this point he became what he calls a “family” comedian. Breuer ends with the story of taking his 87-year-old father on the road with him, and the author’s meditations on how to properly treat and care for the elderly are telling and wise.

Never preachy, though not always engaging—an earnest story of laughs and love.