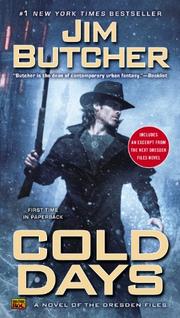 After several months being mostly dead (Ghost Story, 2011, etc.), Chicago wizard Harry Dresden’s back in his body…and of course, back in trouble in the 14th Dresden Files novel.

Harry’s attempt to have himself killed and thus avoid becoming Queen Mab’s champion/assassin, the Winter Knight, has failed, and his first target is Mab’s daughter, Maeve. That means he must figure out how to kill an immortal faerie while defending himself against the vicious, treacherous nobles of the Winter Court and the suspicions of the Summer Court. Harry also learns the disturbing true nature of Demonreach, the sentient island in Lake Michigan now under threat from the demonic Outsiders. If he is to surmount these multiple crises in the next 24 hours, he’ll have to regain the trust of his old friends and allies and master the skills and unsettling desires associated with the Winter Knight’s mantle. Harry’s struggle to reconnect with his friends, in the wake of their devastation at his death, the progress they’ve made without him, and their fear of what he’s become, are very real and poignant. Butcher also plots a long, long game, beautifully integrating small elements from the very first installment onward and gradually revealing their significance. But given that he tries to be so careful about these details, it is a shame that he isn’t assisted by more rigorous copy editing to clean up the continuity errors which continue to riddle the series. For example, it would be lovely if Butcher would explain how faeries, for whom the merest touch of iron and its alloys causes searing pain, can drive/ride in cars and operate various types of guns.

None of that, however, will stop readers from grabbing ringside seats the next time Harry Dresden goes forth to stop the apocalypse.