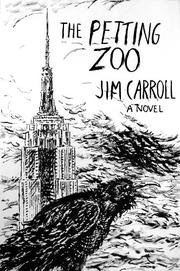 Before his death at the age of 60, Carroll had earned renown decades ago, as a teenage memoirist (The Basketball Diaries, 1978), a poet and a punk-rocker. The protagonist of his only novel is Billy Wolfram, “the golden boy of the New York—indeed international—art world. Billy was only 38 years old, and his star had risen steadily since his first show at 21.” Though Billy is both a prodigy and a Manhattan native like his creator, the painter isn’t merely an authorial stand-in. He receives visits from a talking raven who is apparently immortal (it shares memories of Noah and the Ark) and who serves as both oracle and muse. He has also been celibate since his unfortunate attempt at masturbation may have had a causal connection with the Kennedy assassination. The bare-bones plot begins with Billy’s anxiety attacks, which land him in a mental ward after he attends the opening of an exhibition that suggests to him how much spirituality his own work lacks. During his recovery as something of a recluse, with a looming deadline for his next show, he takes stock of his life through memories of pivotal passages and through minimal interaction with his assistant, Marta, and his boyhood friend, the rock star Denny MacAbee. Much of the stilted dialogue expands into multi-paragraph soliloquies, as Billy doesn’t so much converse as expound. (“ ‘One thing’s for sure, there will be no meeting of minds if our elected officials continue to slash funding for public art—mainly because of their own antiquated tastes and moral codes.’ ”) The author has a lot to say about art—its creation and consumption, its relationship with sex and spirit—but this isn’t the best platform.

The novel doesn’t feel unfinished so much as unbalanced.