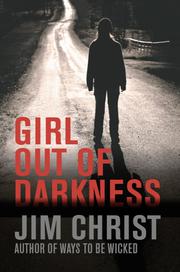 GIRL OUT OF DARKNESS

A young woman is murdered in a small Arizona town in a mystery that showcases the darkness that can lurk in adolescent hearts.

Twenty-seven-year-old Barbara Pyre is found dead in Copperton, Arizona, by two local boys after apparently falling 30-plus feet from her own balcony. However, the medical examiner quickly rules her death a homicide after finding signs that she was pushed. Police deputy Pete Caldwell—“past sixty, gray-haired and wrinkle-faced”—catches the case and immediately takes a hard look at the victim’s 41-year-old husband, Slick, a biker with a penchant for aggression; his alibi is shaky, and both he and Barbara were engaged in extramarital affairs. Pete also investigates Barbara’s troubled background and finds that she was painfully estranged from her parents, just as Pete’s son, Cordell, is estranged from him. Christ (Ways To Be Wicked, 2017, etc.) reveals the murderer’s identity in the first quarter of the book; as a result, this is less a murder mystery fueled by suspense than a crime drama sustained by gimlet-eyed, sometimes-poetic psychological insight. Here, for example, the author concisely captures Pete’s cautious style: “He was like the fisherman who reads up on the trout stream and its species and checks with the locals about where the best pools are and then scouts the area ahead of time to catch bugs and make sure he’s tying the right kinds of flies, all before he ever makes a cast.” Among the principal suspects is Slick’s 14-year-old son, Timmy, a hulking athlete who simultaneously loathes and desires his stepmother. Pete is an intriguing character, as well—a former prisoner of war who’s inclined toward unfiltered candor and emotional repression. Drawing deeply from a rich tradition of hard-boiled detective fiction, Christ’s novel is unsentimentally realistic as it bravely tours the dark corridors of the human soul.

A gripping story told with verve and intelligence.