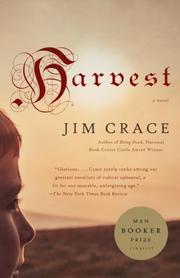 Rarely does language so plainspoken and elemental tell a story so richly open to interpretation on so many different levels.

Is this a religious allegory? An apocalyptic fable? A mystery? A meditation on the human condition? With economy and grace, the award-winning Crace (The Pesthouse, 2007, etc.) gives his work a simplicity and symmetry that belie the disturbances beneath the consciousness of its narrator. It’s a narrative without specifics of time or place, in the countryside of the author’s native England, following a harvest that will prove different than any the villagers have ever experienced, in a locale where, explains the narrator, “We do not even have a title for the village. It is just The Village. And it’s surrounded by The Land.” In the beginning, the narrator speaks for the community, “bounded by common ditches and collective hopes,” yet one where “[t]heir suspicion of anyone who was not born within these boundaries is unwavering.” The “they” proves crucial, as the narrator who initially speaks for the collective “we” reveals that he is in fact an outsider, brought to the village 12 years earlier by the man who is the master of the manor, and that he is someone who has become a part of the community, yet remains apart from it. There has been a fire following the harvest, disrupting the seasonal cycle, and although evidence points to three young men within the community, blame falls on two men and a woman who have recently camped on the outskirts. There is also someone making charts of the land and an issue of succession of ownership. There is a sense that this harvest may be the last one for these people, that the land may be converted to different use. “[P]lowing is our sacrament, our solemn oath, the way we grace and consecrate our land,” yet that way of life may soon be over. “There isn’t one of us—no, them—who’s safe,” declares the narrator, who must ultimately come to terms with the depths of his solitude.

Crace continues to occupy a singular place in contemporary literature.