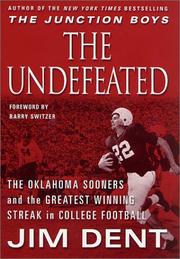 A rousing look at the colorful coach and players who achieved an amazing 47-game winning streak for the Oklahoma Sooners.

In order to have present-day readers understand the true significance of the Sooners, Texas journalist Dent (The Junction Boys, 1999) gives helpful background information about the state where “Big Oil was a dream. But football was a religion.” Oklahomans, still suffering from effects of the Great Depression, also had to contend with the popular perception (perpetuated by Steinbeck’s Grapes of Wrath) of destitution and dispossession. In an attempt to fight the stereotypic Okie image, the University of Oklahoma decided to answer with a winning football team. And win they did. With coach Bud Wilkinson at the helm, from the second game of the 1948 season to the eighth game of the 1957 season, the Sooners compiled a staggering 94–4–2 record. They had winning streaks of 31 games and the fabled 47, which ended painfully at the hands of archrival Notre Dame. Dent avoids the potentially dry, statistical tone and instead provides atmosphere with snappy dialogue and by fleshing out the team, foibles and all. Wilkinson (dubbed “The Great White Father”) believed in a strong team of 22 “lean, fast, hard-boned country boys,” including a good group of second stringers. Besides their play on the field, the team, including the coach, played hard off of it, with women and drinking figuring prominently. Some players stand out, particularly quarterback Jimmy Harris, 1952 Heisman Trophy winner Billy Vessels, Gomer Jones, and the first black player, Prentice Gautt, whose personal struggles to be accepted by his teammates and his treatment under the Jim Crow laws provide some of the more poignant moments here. An epilogue reveals how many of the key people of those teams led, and still lead, productive, successful lives.

Like eavesdropping on the team bus, sports enthusiasts will enjoy reliving a time when college football was top national news. (16 pages b&w photos, not seen)