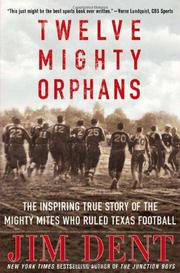 The latest work from Dent (Monster of the Midway, 2003, etc.) describes the rise of a group of orphans who defied the odds to become a power in Texas high-school football.

The parentless denizens of the Masonic Home in Fort Worth were looked down on by many of their neighbors as second-class citizens. Their status changed in 1927, however, with the arrival of Rusty Russell, a visionary young coach determined to make his mark on the high-school football landscape. An unassuming World War I veteran, Russell was confident he could make his players winners despite the fact that they were severely undersized, giving up inches and pounds at every position (hence the nickname “Mighty Mites”). Faced with a student body that barely exceeded 100 and a team of only 12 players, Russell countered with a 700-page playbook and the determination of his players to prove their doubters wrong. In only five years, Russell built the team into a powerhouse that clawed its way to the Texas high-school championship game. Outweighed and out-manned, the Mighty Mites would remain one of the state’s elite football teams for the next dozen years. But they never won a championship, and lacking such a ready-made climax, the narrative meanders. Dent describes many seasons and provides a great amount of detail about individual games; he also profiles some of the team’s more talented stars. (Hardy Brown, later feared as one of the NFL’s most violent players, joined the Masonic Home after seeing his father, a bootlegger, murdered by rivals.) The author clearly intends this to be an uplifting Depression-era sports tale similar to those of racehorse Seabiscuit or boxer James Braddock. However, since the Mighty Mites didn’t capture the same kind of national attention, the level of detail seems excessive.

Unfocused and repetitive, though the Mites’ story is inspiring.