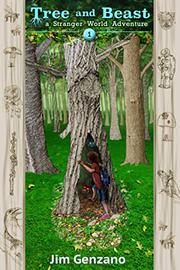 An imaginative boy discovers a door to a fantastical realm in this middle-grade adventure.

Eleven-year-old Hunter Wilson is obsessed with finding monsters. He looks for them under his bed and anywhere else he can conceive of them hiding. One day, he attends a field trip to a nearby pond with his classmates, including his best friend Gert Clemmons. They’re planning to collect jars of pond water to later examine under microscopes. A forest is close by, however, and Hunter can’t resist exploring it. He stumbles upon a large tree with a cavity filled with glowing mushrooms, which he enters; he then encounters tiny people who seem frightened of him and pelt him with acorns. When he emerges from the tree at last, he finds himself in a completely different forest. Among the strange trees there, he finds a talking raven who tells him the tale of the King of Monsters. Hunter then meets a gigantic dog whom he names Murphy; together, they find a machine that resembles a “black, gleaming moon” above the forest canopy that’s destroying trees. Elsewhere, the Puzzle Piece Man is well aware of Hunter’s progress and certain the boy will go even further. Genzano’s fantasy is a surreal, unpredictable narrative in the tradition of Alice’s Adventures in Wonderland that precocious readers will enjoy. This volume lays potential groundwork for future installments with details such as Hunter’s favorite book, The Yellow Castle, Volume One: Shadow Tower, as well as snippets of characters in other realms noticing Hunter leave his own woods. The prose evokes a sense of discovery and magic, as in a description of a tree covered in “soft, furry, chestnut-colored growths” that “wagged sometimes in rippling sequence.” The story unfolds in sometimes-lengthy paragraphs that may challenge some middle-grade audiences.

A colorful, tenderly told story for youngsters with vivid imaginations.