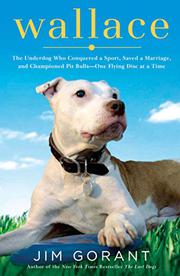 The Pit Bull Who Conquered a Sport, Saved a Marriage, and Championed His Breed--One Flying Disc at a Time

Sports Illustrated senior editor Gorant (Lost Dogs: Michael Vick's Dogs and Their Tale of Rescue and Redemption, 2010, etc.) recounts the tale of a rescue dog who became a world champion Frisbee dog and a mascot for pit bulls.

Apparently slated for an illegal dogfighting operation, Wallace was discovered by a policeman and eventually left with an animal shelter. His next owners, Andrew (Roo) Yori and his wife, Clara, had already adopted four dogs from the shelter, where she worked and he volunteered. At first, they hoped to find the puppy—whom they later named after NBA star Rasheed Wallace—a new adoptive home, but it became a problem. Not only do pit bulls have a bad reputation, but Wallace was a difficult dog. He was obstreperous with an unfortunate tendency to nip at other dogs, but he was playful and fundamentally friendly. Although the shelter turned to euthanasia only as a last resort, as time passed this seemed to be the future awaiting Wallace. Roo and Clara decided to take him in despite the problems. Roo used his own athletic prowess to train Wallace in disc-catching, and the sport provided an extreme athletic challenge for both man and dog. Gorant describes how they rose to the top in this highly competitive sport, and he also looks at the strains and rewards experienced by the newly married couple. Dog lovers will certainly enjoy the story of Wallace’s journey, but the author’s digressions interrupt the narrative flow.

Too many detours confuse this account of an inspiring achievement.