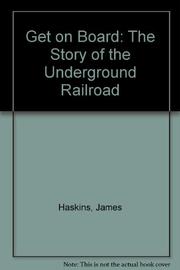 The Story of the Underground Railroad

The frequently told story of the Underground Railroad has, claims Haskins, all too often ``played up the extent of its organization and the efforts of whites, especially Quakers, and played down the less organized efforts of slaves, free blacks and other whites.'' Here, he focuses more on people than process in his account of the antislavery movement, the increasingly harsh measures against fugitives in the 19th century, and the courageous work of several stationmasters and conductors dedicated to helping escapees; coded songs and other subterfuges designed to spread the word are also discussed. Haskins devotes a chapter to Harriet Tubman, one to John Brown (author of an important fugitive slave narrative), and another to some ``passengers'' who succeeded in escaping largely on their own, and concludes with the 13th Amendment and the Railroad's transmutation to legendary status. Though this brief account helps set the record straight, its dry, didactic prose limits appeal, especially for collections that already own Shaaron Cosner's Underground Railroad (1991). Archival photos, bibliography, and index not seen. (Nonfiction. 10-13)