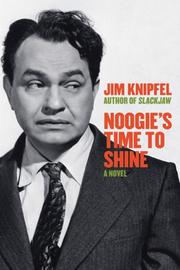 This slapstick caper novel can’t sustain the energy of its zany setup.

Knipfel (The Buzzing, 2003, etc.) plainly enjoyed himself creating the character of Ned “Noogie” Krapczak, a hapless schlub who somehow amasses a small fortune by skimming from the ATM machines that he services. Reportedly inspired by an actual crime, the novel has some fun with Noogie, who hates his nickname but prefers it to the common mispronunciation of his last name (“Crap Sack”), who lives with his bellowing mother and his Siamese cat, Dillinger, and who has no life beyond the movies that obsess him. One day on his New York rounds, he accidentally misplaces a $20 bill. When it isn’t discovered, he starts to take more and more, until he has stolen almost $5 million without arousing any suspicion from the home office in Fort Lauderdale. At about the 50 page mark, Noogie learns that he’s been discovered, and he and his cat hit the road, abandoning his mother. Unfortunately, Knipfel has no more idea than his protagonist where to head from here, as both Noogie and the reader quickly find themselves “getting a little bored with this ‘on the lam’ business.” Noogie thinks his escape will make his life as exciting as a movie, but nobody appears to be chasing him. Whether out of ineptitude or desperation, he seems to do everything he can to draw the sort of attention that might result in his capture, leaving a $40 tip for a two-buck meal, spinning preposterous stories about his background, trading his van in for one exactly like it (with the same plates), heading for Florida where he knows they’re looking for him. The novel’s second half (following an “intermission” of 16 pages) features a significant plot twist that throws the narrative chronology out of whack and makes the reader care even less about Noogie than before.