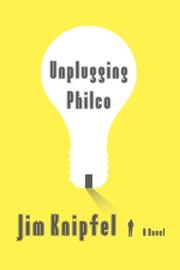 A bumbling antihero struggles for a little peace and quiet in the dystopian near future imagined by Knipfel (Noogie’s Time to Shine, 2007, etc.).

Following “the Horribleness,” a mysterious attack in Tupelo, Miss., which has been used by the government as an excuse to wage a pointless war, citizens live under constant surveillance and the fear of being branded as potential terrorists. Corporatization has invaded everything, including (thanks to implants) the skulls of all good citizens. Personal communication devices called “VidLogs” are “more mandatory than pants.” A run-in with a member of the Stroller Brigade, an organization of sadistic mothers who bully childless citizens with razorblade-fitted perambulators, lands Wally on the wrong side of the law. He’s had enough: his loveless marriage, the constant commercials blaring inside his head, the nosy neighbors bent on ratting out nonconformists to the authorities—they all combine to drive Wally to attempt the unthinkable. He removes the implanted chip designed to make him a good citizen, rendering himself for all practical purposes invisible. Through a series of strange coincidences, Wally meets an entrancing hippie and a wisecracking dissident cowboy; they introduce him to a band of subterranean Luddites with designs on taking the world back to simpler, pretechnological, preauthoritarian times. But are the revolutionaries what they claim? Is their work that of true patriots or the criminally insane? Like Wally, readers are constantly befuddled by a surreal landscape, a cartoonish cast and a catalog of corny acronyms: SUCKIE (Single Universe Citizen Identification) cards, “SMEG/MA” (Salacious Materials Enforcement Group Metropolitan Area), etc. Thinly veiled allegories for 9/11, the Patriot Act and other contemporary phenomena bludgeon rather than enlighten. Wally and his merry band of “Unpluggers” drift in an amalgamation of themes borrowed from Orwell, Vonnegut and other masters of dystopian literature toward the inevitably cynical conclusion.

Irreverent humor doesn't compensate for insubstantial characters, nor does some mildly endearing self-deprecation redeem this satire's aimlessness and lack of engagement.