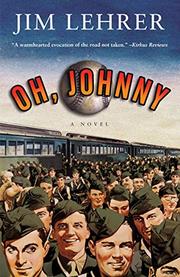 A young ex-Marine pursues two ideals, a major-league baseball career and a young woman he knows only as Betsy, in Lehrer’s bittersweet 19th novel (Mack to the Rescue, 2008, etc.).

It’s 1944, and Johnny Wrigley is 17 and green as grass when the troop transport taking him from Baltimore to California stops off in Wichita, Kan. Though the stop lasts barely half an hour, it’s long enough for Johnny to lose his virginity with Betsy, one of the girls who came to meet the train with apples and smokes for the recruits. Johnny can see that Betsy is religious in an oddly directive way he’s never encountered before. But he also knows from the first that he loves her in a way he’ll never love anyone else, and in a series of letters he composes but never writes down, he pledges his love and vows that he’ll return. That turns out to be a tall order. First Johnny has to survive brutal combat on the island of Peleliu, where he’s been trained to use a flamethrower—an assignment that turns him into a target and gives him a worm’s-eye view of horrific casualties, including those he inflicts himself. Then, on his return stateside, he has to search fruitlessly through Wichita and environs for Betsy before giving up and returning home to Lafayette, Md. Eagerly embraced by his fond mother and the kid sister of a friend who was killed in Europe, Johnny reverts to his original dream: becoming a baseball star in the mold of his idol, Brooklyn Dodgers center fielder Pete Reiser. This dream also goes bad, leaving Johnny with nothing but a menial job and his hopes of returning to both baseball and Betsy. Eventually his dreams come true, but not quite in the way he expected.

The understated tone of this Everyman’s Citizen Kane perfectly suits Lehrer’s gifts, as he eschews his usual satiric stance for a warmhearted evocation of the road not taken.