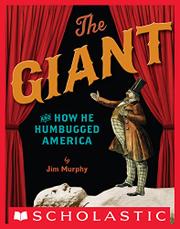 THE GIANT AND HOW HE HUMBUGGED AMERICA

When a stone giant is found on a farm in upstate New York, William Newell sees the chance to get rich quickly.

On October 16, 1869, in Cardiff, N.Y., Gideon Emmons and Henry Nichols went to William Newell’s farm to dig a well. After a few hours of hard digging, they hit stone and eventually unearthed a 10-foot stone man, so anatomically detailed that examiners suggested a fig leaf in case the “unclothed giant might provoke the village women to have sinful thoughts.” Was it an “old Indian”? A Stone Giant of Onondaga legend? A petrified man? Farmer Newell capitalized on the “discovery,” and before long, lines of people were paying good money for the chance to see the marvel, demonstrating that Charles Ponzi and Bernie Madoff were not the first to make money on people’s will to believe. Murphy effectively recreates the place and times that made the Cardiff Giant famous, building on solid and well-documented research. A generous mix of newspaper illustrations, carnival posters and photographs lend a period feeling to the thoroughly engaging volume.