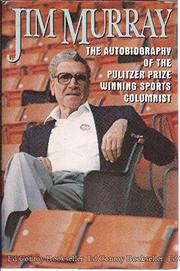 Selective reminiscences from a Pulitzer-winning sports columnist that, though several bricks shy of an autobiographical load, offer a host of pleasures for fans of big-time athletics and celebrities—and of fine writing. A child of the Depression, the seventysomething Murray was raised in Hartford, where a raffish crew of black-sheep uncles attended to his extracurricular education. Fast forwarding by a couple of decades, the author recalls a 1950's stint as Time's Hollywood correspondent, covering the oddly grouped likes of Humphrey Bogart, Billy Graham, Marilyn Monroe, Richard Nixon (on the eve of his ``Checkers'' speech), and John Wayne. Eventually recruited as a founding editor of Sports Illustrated, Murray spent many years as a roving reporter for this weekly before moving on to The Los Angeles Times, where his syndicated column has gained him a national readership. While generally reserved about his private affairs, the author includes enough asides to suggest that life has not been all that easy for the Murray clan. Among other trials, he lost his wife to cancer (months short of their 39th anniversary) and a son to drugs; since the early 1970's, moreover, the author has labored under the gun of detached retinas that threaten to take his eyesight. But for the most part, Murray's anecdotal narrative features short takes on the notable personalities whose paths he's crossed during his long and interesting career—from Muhammad Ali and Wilt Chamberlain through Jack Kent Cooke, Al Davis, Ben Hogan, Magic Johnson, Don King, and Pete Rose. For seasoning, the author throws in acerbic critiques of the cities he's visited; dismayed reflections on what TV has done to, as well as for, sport; and commentary on how, so far as race is concerned, sport reflects the society of which it's a part. An engaging potpourri from a perceptive observer.