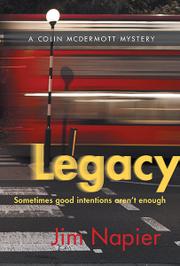 Police investigate a London university where the faculty includes someone who may resort to murder to keep a secret in this crime-thriller debut.

DI Colin McDermott’s latest case is a woman’s death by London Transport bus. It could have been an accident or suicide, but it’s definitely suspicious. There was no ID near the body, for one, and Metropolitan Police learn she had two names: her real one and what she’d used at St. Gregory’s College. Since she died near the college and during the lunch break, McDermott, DS George Ridley, and DC Wilhemina Quinn question St. Gregory’s faculty. Turns out a few of the suspiciously unhelpful professors have applied for the soon-to-be vacated principalship; detectives surmise the victim, a first-year student, in some way posed a threat to an applicant. One of the faculty members later turns up dead in a probable suicide, but McDermott treats it as a second murder, likely at the hands of a single killer. Shady histories among the teaching staff slowly come to light, from blackmail to spousal abuse. McDermott searches for a link between the two victims and determines who at St. Gregory’s has something to hide—something worth killing for. Napier layers his story with subplots, motives, and suspects, with the narrative examining characters just like the detectives do. Pinpointing the culprit is far from easy, and suspense is aptly retained until the tale’s nearly over. Still, the author manages nuance: the DI remains understandably affected by his wife’s terrorist-bombing death a decade earlier and steps in to help his daughter Megan’s friend Pam, whose parents are apparently ashamed of her lesbianism. The dialogue consists primarily of trading information or speculations, befitting the whodunit format. McDermott, however, is not without sardonic wit, calling an especially shifty individual a “veritable paragon of virtue.” Readers unfamiliar with British slang will find plenty of narrative context (for example, an “argy-bargy” is clearly an argument).

A riveting procedural with detectives who are as curious as the suspects they’re investigating.