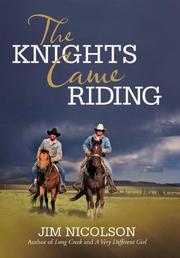 An open, sensitive story about a robust, life-loving father and his adult son, Nicolson’s third novel takes the reader on a journey of discovery.

Two-time widower Seumas McKinnon is the story’s anchor, a man who must untether himself from his son, Alasdair, who has had all the blessings of life handed to him. Seeking the solace of the Isle of Skye in Scotland, Seumas embarks on a quest to re-discover his roots and learn a bit of Gaelic. While there, he meets Morag, a lovely middle-aged “copper-haired” woman who works in a local coffee shop. Slow to trust men after a failed relationship, Morag gradually develops a deep and loving connection with Seumas. The book’s parallel storylines also explore Alasdair’s changing life. A playboy lawyer with striking good looks, Alasdair finally meets his match in beautiful Annie O’Hare, a physiotherapist with roots in Hong Kong. At first, Annie and Alasdair treat their relationship with casual abandon—no strings, no expectations.  But Annie is unlike other women. She spars with, challenges and draws the best out of Alasdair. Fascinated by each other, the two move their relationship to the next level as they both slowly recognize the love they share for each other. Nicolson uses their romance to contrast a number of relationships in this story. For example, Seumas’ neighbor has an antagonistic marriage that makes Seumas appreciate his connection with Morag, a relationship that finally helps him overcome the guilt of remarrying when his first two wives were taken from him. The story drags a bit toward the center, with often predictable plotlines and not enough conflict or surprise. But the pace accelerates as both father and son move toward their destined relationships. Things really pick up when a nearly fatal accident challenges both the father-son bond and Annie and Alasdair’s love.

Not a page turner but still a satisfying, descriptive presentation of locations and complex personalities.