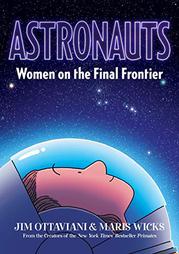 Women on the Final Frontier

How women got mad, busy, and finally, reluctantly, accepted into NASA’s corps of astronauts.

Recast by the creators of Primates (2013) from NASA oral-history interviews with ex-astronaut Mary Cleave and other eyewitnesses, this likewise lightly fictionalized memoir takes its narrator from childhood interests in science and piloting aircraft to two space shuttle missions and then on to later educational and administrative roles. The core of the tale is a frank and funny account of how women shouldered their way into NASA’s masculine culture and as astronaut trainees broke it down by demonstrating that they too had both the competencies and the toughness that added up to the right stuff. Highlighted by a vivid series of scenes showing Cleave with a monkey on her chest, then a chimpanzee, an orangutan, a gorilla, and finally a larger gorilla to symbolize the G-forces of liftoff, Wicks offers cleanly drawn depictions of technical gear, actual training exercises, eye-rolling encounters with sexist reporters and clueless NASA engineers, iconic figures (such as a group portrait of the watershed astronaut class of 1978: “Twenty-six white guys and nine…well…people who were not. Pretty diverse for NASA”), and astronauts at work on the ground and in space. They capture both the heady thrill of space travel and the achievements of those who led the way there.

Exhilarating—as well as hilarious, enraging, or both at once depending on the reader.