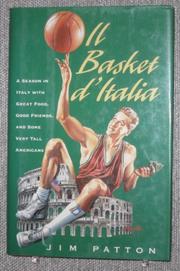 A Season in Italy with Great Food, Good Friends, and Some Very Tall Americans

A sunny, refreshing season of pro basketball in the Lega Pallenestro Italiano. Depressed, recently divorced, disillusioned, and fed up with the arrogance and cynicism of American sports, Oregon sportswriter Patton jumped at the chance to spend 1992 in Italy. Based in Bologna, the 32-team Lega Pallenestro plays a 30-game schedule. The lega champion goes on to play in the European Cup tournament, but there is also a complicated system of international tournaments and playoffs. Each team is allowed two stranieri, or foreigners. Many of these are former NBA players such as Darryl ``Chocolate Thunder'' Dawkins and former Detroit Piston ``bad boy'' Rick Mahorn. Cut by the Il Messagero team (ostensibly for a locker-room tantrum, though some claim he'd become ``fat and lazy'') just a few days before Patton arrived, Mahorn was proof that NBA fringe players ``don't automatically become stars in Italy.'' (Mahorn, however, finished 1994 with the New Jersey Nets and his old coach, Chuck Daly.) While the author spends a lot of time with the Americans, he also profiles Italian stars such as il monumento nationale, 69'' Dino Meneghin, who, at 43, was playing his 27th season at pivot, center. ``Italy's greatest player,'' Meneghin led Varese to seven championships in his first ten years in the league and then won five more with the Milan team. There's also C'e solo un (the one and only) Roberto Brunamonti, slick point guard for Knorr Bologna, and his suave coach, Ettore Messina, who, when talking basket, will blithely refer to Saint Sebastian and his favorite Greek mythological heroes. Patton's descriptions of the often ineptly played games (``You see shots there's no name for'') and the boisterous, lewdly chanting crowds are a delight. Well flavored with wonderful passages on the foods, the people, the travel from village to city, and the joys and frustrations of daily life in a foreign land. (8 pages b&w photos, not seen)