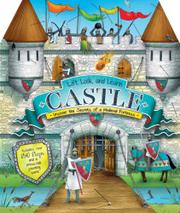 Uncover the Secrets of a Medieval Fortress

Flurries of small-to-tiny flaps give good cause to linger at each stop on this buttery-to-battlements castle tour.

It’s not all typical 13th-century feasting and fighting on display either, as opening teasers warn of 16 anachronistic items (among them a pair of boxer shorts), a lost treasure and a spy—or maybe ghost—to spot along the way. Castle de Chevalier comes equipped with a lord and lady, mail-clad men at arms and servants of diverse sorts. There’s also a well-stocked torture chamber/dungeon and, as revealed in cutaway views and beneath the diminutive die-cut flaps, thriving populations of bats, rats and spiders…not to mention the occasional detached head. The visit ends with a tournament, where tents, spectators and jousting knights can be viewed in situ or rearranged to suit with separate punch-out versions. Except for an arrant disconnect on the chapel spread, Pipe’s flippant commentary supplies tolerable if rudimentary bits of plot and explication. Though not so maniacally awash in microbusiness as the illustrations in Stephen Biesty’s Cross-Sections: Castle (written by Richard Platt, 1994), Taylord’s bustling cartoon scenes may well require a magnifying glass to make out all the detail. The same applies to the cutaways and Victorian-era rooms in the simultaneously published Lift, Look, and Learn Doll’s House.

Fold down the drawbridge and step through. Mind the mucky patches.