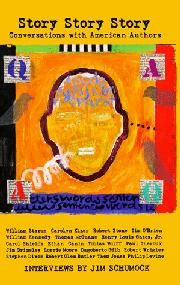 Schumock’s interviews with writers on his Portland, Ore., radio program are generally entertaining if not enlightening. These transcriptions of one-hour talks from KBOO radio’s Between the Covers program suffer from a lack of framework. No dates are given for the interviews; the brief author bios are updated only to the time of the interview, not to this book’s publication. Thus, there are vague references to a “most recent” novel or “latest” collection, but no mention of a writer’s later works or accomplishments. And Schumock’s prefatory remark that “anyone who reads this book in its entirety will gain a much broader perspective on American literature in the second half of the 20th century” certainly overstates his case. The lack of time-frame doesn’t matter much in some of the interviews: William Styron’s focuses on literary influences and his determination that his first novel, Lie Down in Darkness, not be a “standard, autobiographical, young man’s novel.” Schumock discusses literary influences with several of the writers, most effectively with Thomas McGuane, who cites Malcolm Lowry’s Under the Volcano as “essential reading for modern writers.” Paul Theroux’s interview, done near the release of My Other Life (1996), looks at autobiography, noting that the author is, in effect, a “character” similar to a fictional creation. Lorrie Moore, one of just three women collected here (the others are Carol Shields and Carolyn Kizer) sees writing as “the process of creating new worlds . . . a kind of scary and mad project.” In Tobias Wolff’s fascinating interview, the acclaimed short-story writer connects the “fragmented nature” of his transient youth with his reluctance to attempt a full-length novel. Almost all the interviews are concluded with the silly convention of asking, if you were stranded on a desert isle, what two books would you want? Surprisingly few had clever responses. Sufficient introductory and follow-up material might have provided a boost for this merely diverting collection. (10 pp. author photos, not seen)