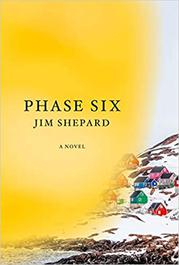 Paced like a prophetic thriller, this novel suggests that "pandemic" is a continuing series.

Shepard has frequently employed research as a foundation for his literary creations, but never before in such pulse-racing fashion. He's set this narrative in the near future, when the threat of Covid-19 has passed but provides a cautionary lesson. And what have we learned from it? Not enough, apparently, as an outbreak within an extremely isolated settlement of Greenland begins its viral spread around the globe. Readers will find themselves in territory that feels eerily familiar—panic, politics, uncertainty, fear, a resistance to quarantine, an overload of media noise—as Shepard's command of tone never lets the tension ease. Eleven-year-old Aleq somehow survives the initial outbreak, which takes the lives of everyone close to him, and he may provide the key to some resolution if anyone can get him to talk. The novel follows the boy and the pandemic from Greenland to a laboratory facility in Montana as, in little more than a month, the virus or whatever it is, spread by touching, traveling, breathing, has infected some 14 million around the world. Jeannine Dziri and Danice Torrone, a pair of young researchers from the Centers for Disease Control and Prevention who have dubbed themselves the “Junior Certain Death Squad,” find themselves on the front lines as they attempt to balance personal relationships (which occasionally read like plot contrivances) with all-consuming professional responsibilities. Meanwhile, the pandemic proceeds relentlessly. “APOCALYPSE II?” screams a Fox graphic amid “the social media cacophony,” as mass hysteria shows how human nature can take a horrible situation and make it so much worse. And though the novel builds to a sort of redemption, it suggests that there will be no resolution to the current pandemic beyond nervous anticipation toward the ones to come. Channeling Pasteur, Shepard promises—or threatens—“It will always be the microbes that have the last word.”

All the narrative propulsion of escapist fiction without the escape.