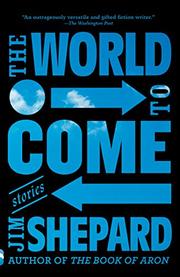 THE WORLD TO COME

Shepard's fifth story collection—his first book since his well-received novel, The Book of Aron (2015), which was a Kirkus Prize finalist—demonstrates why he's a writer who defies categorization.

An extended bibliography shows just how meticulous Shepard's research is, as usual. There’s nothing confessional in his work, no possibility of confusing the author with his protagonists, who include a frontier housewife in a loveless marriage (the title story), a French balloonist in the 18th century who is as impractical as he is imaginative (“The Ocean of Air”), and a British submariner in World War II “immersed in a haze of inertia” (“Telemachus”). Some of his stories take the form of diaries, and he writes in the language and cadence of the period, suggesting an occasional stylistic affinity with Conrad and Melville. Yet these aren’t historical fictions or period pieces but meditations on the past as prologue, on seeing the world to come (as the title has it) in the world that has been. This world is one in which impersonal bureaucracy trumps individual initiative at every turn, whether Shepard is writing about the seemingly predestined collapse of an Air Force information tower (“Safety Tips for Living Alone”), illuminating “the state of most of our railway infrastructure, which on a good day can look like the shittiest Third World footings and tracks on a bad day” (“Positive Train Control,” which has pages that read like investigative journalism), or a doomed 19th-century seafaring exploration ("HMS Terror"). In addition to institutional forces, fate and nature make humanity seem very small in these stories; so many of their protagonists are somehow feckless and hapless as they try to find some semblance of a lifeline in the most tenuous connections, in what the final story terms, with a tinge of irony, “the silver lining of their intimacy.”

A stylist whose fictional expansiveness underscores his singularity.