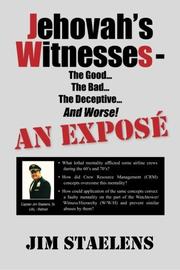 A former Jehovah’s Witness speaks out about the religion.

Author Staelens, in his debut nonfiction book, writes from a personal perspective as a former longtime member of the Jehovah’s Witnesses. He’s interested in the history of the organization, its prophecies and its practices, in which he sees coverups, deception, manipulation and an abuse of power. In essence, Staelens depicts Jehovah’s Witnesses as less of a church group than a cult, requiring complete adherence to doctrine among its members and denying the questioning of its tenets. In looking into the group’s past, he uncovers instances of foundational stories that have been retroactively glossed over and avoided. He relates tales about members of the hierarchy damaging families through abuse of the group practices of “disfellowshipping” and shunning members who fall out of favor with leaders. The author, who’s also a former private and commercial pilot, borrows lessons and metaphors from his profession that he believes could be applied to his former religious group. In particular, he outlines how the airline procedure of “crew resource management”—which focuses on interpersonal communication, leadership and decision-making improvements—could help avoid human error. The concept, first started by NASA, has spread to other industries, and the author argues that it could also be usefully applied to religious hierarchies in order to eschew autocratic decision-making and lopsided judgments. Staelens’ writing style is direct though colloquial, often asking rhetorical questions of the reader and frequently resorting to invective and hyperbole, such as comparisons of church propaganda to Nazi propaganda. He appears to be writing primarily for members of the religion to convince them to rely on their own reasoning and judgment and to beware of the group’s teachings. He has potential for a readership within the context of disaffected members, though he would be better served to tone down the volume of his writing and take a more analytical approach in order to sway a larger audience with reason and scholarship.

A personal, highly charged—perhaps too much—investigation of the prophecies and policies of the Jehovah’s Witnesses.