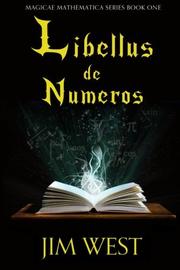 From the Magicae Mathematica series

West’s debut middle-grade novel asks: What happens when a young girl finds herself in a city governed by magic and math?

For young Alex, traveling all over the world with her engineer father has lost its sheen, and she’s discontented with her life. One day, however, during a confrontation with bullies at school, she’s suddenly and inexplicably thrown into a new world. There she meets Archimedes, a surprisingly sprightly old man who appears to be a magical being. He takes her to a place called the City, where she learns that what she sees as magic is actually a combination of math and Latin. As it turns out, Alex already knows Latin—and she’s about to learn a lot more math. Under Archimedes’ wing, she and other students learn lessons from the Book of Numbers, which give her powers that the City’s ruling classes fear. As trouble brews outside the City from wizards who’ve turned to the dark side, Alex struggles with the power of her own magic, her homesickness, and the intensity of her emotions. When danger comes to the City itself, Alex and Archimedes must try to save it in the only way they know how—with math, magic and love. West’s novel will appeal strongly to readers who enjoyed Norton Juster’s The Phantom Tollbooth (1961) as younger children. As with that book, a pre-existing love of math isn’t required; Alex doesn’t see the big deal about numbers until she learns about their magic, and readers won’t need to either. West uses figures from Greek mythology throughout the book, and these references will be delightful to those who understand them, but unimportant to those who don’t. The author draws on a wide range of sources—including a city that resembles the one in Plato’s The Republic—while still managing to write a gripping book for middle-grade readers. The references may even inspire further reading in the classics. Alex’s femininity is never a plot point, either, providing an ideal example of a strong girl completing heroic tasks.

A mix of mathematics, sorcery and heroism that’s not to be missed.