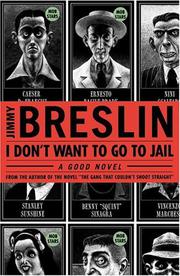 I DON’T WANT TO GO TO JAIL

New York’s greatest newspaper columnist (Not Exactly What I Had in Mind, 1997, etc.) does another number on da Mob. (You got a problem with that?)

We want to thank Breslin’s brain for remembering that he’s still the funniest crime writer on the planet This sentimental, wildly comic return to form from the guy who blazed to glory so many years ago with The Gang That Couldn’t Shoot Straight (1969), is pure pleasure, with a belly laugh on almost every page. We meet aging, lazy, but still vastly intimidating mob boss Fausti “The Fist” Dellacava, a former prizefighter so adverse to losing that his bookies stay up all night trying to dream up ways to turn The Fist’s unlucky wagers into winners. ("Either I count money on Saturday night or I get choked to death," thinks one bookie. "That's only fair.") The Fist is having an increasingly difficult time holding on to his Greenwich Village turf, as his smart but slightly naive nephew, also named Fausti, tries to figure out if he wants to go into the family business. Only Fausti the Younger is brave enough to risk The Fist’s wrath when he impulsively eats The Fist under the table in front of mob lieutenants Baldy Dom, Quiet Dom, and Dom Dom. But Fausti also has doubts about his uncle’s morals: The Fist has been living a double life, shuttling across Manhattan between two wives with three kids each while pretending nobody notices. When young Fausti gets a summer job as lifeguard on Rockaway Beach, he inadvertently sets off a vendetta when he fails to save the life of a minor Gotti gang member. Playing the sidelines, with all bets covered, is the ambitious, media-savvy Father Phil Napolitano, a distant relative of the Dellacavas who preaches that “there never was a stand-up man like” Jesus, and Judas Iscariot “should have died in his mother’s womb,” but “we must give some people the benefit of the doubt. We shouldn’t be too quick to whack some guy.”

A meandering, wonderfully colorful hop-skip-and-a-grunt tour of the Little Italy that tourists wish they could visit, told in Breslin’s distinctively snappy, side-of-the-mouth style.