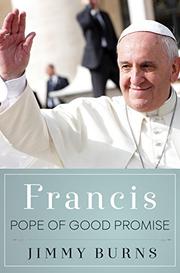 A wide-ranging biography of the current pope.

Journalist Burns (La Roja: How Soccer Conquered Spain and How Soccer Conquered the World, 2012, etc.) admirably tackles a difficult subject but meets with mixed success. The author’s plan is evident: to introduce readers not only to Jorge Mario Bergoglio (now known as Pope Francis), but also to the setting in which he was raised, Argentina. What Burns presents, however, is largely a political history of modern Argentina, followed by a topical look at the young papacy. The result is unwieldy and untamed. Speaking often in the first person, Burns takes a guardedly positive view of the pope. As a young man, Bergoglio was deeply affected by populist President Juan Perón, and he remained a Peronist at heart throughout his life. Nevertheless, Bergoglio proved himself adept at navigating the terrifyingly choppy political waters of Argentina, surviving (figuratively and literally) a number of regimes and juntas through his years as a public figure. As head of the Jesuits in Argentina, and then as a bishop and later archbishop, Bergoglio found himself as an enforcer against leftist politics among his clergy while simultaneously working on behalf of the poor. Bergoglio is described variously as authoritarian and as pastoral, and Burns recounts a complex man shaped by the always volatile and sometimes-brutal realities of his nation. “While Pope Francis’s spirituality is not in doubt,” the author summarizes, “the life of Jorge Bergoglio, as Jesuit priest and bishop, was far from flawless, and deeply human in its vulnerability and complexity.” Without much of a transition, this imperfect character becomes pope, and the remainder of Burns’ work is dedicated to his papacy, seen from the view of various topics: poverty, economic scandal, gender, sexuality, etc. Francis comes across in each case as mildly positive as well as rather unpredictable.

A sprawling study that, though enlightening, takes readers on more of a journey than they may have bargained for.