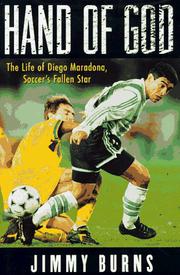 A diffuse and hype-riddled profile of world soccer's ``bad boy.'' Burns, a correspondent for Britain's Financial Times, pieces together the career of Diego Maradona, which saw remarkable heights and depths—often in quick succession. To Burns, Maradona (who as of this book's UK release in 1996 was serving a ``banned substances'' suspension by soccer's international governing board) was a mercurial soccer ``genius''—a phrase the author badly overplays—who all too often fell prey to his protean appetites for drink, drugs, and the company of easy women. Growing up in Argentina's machismo-soaked sporting culture, Diego was further encouraged to succeed by his family as a way out of poverty. Maradona's later troubles, it would seem, stemmed from his having too much too soon: He played his first professional match in 1976, just shy of his 16th birthday; by the time he was 22, he was a millionaire. When he was good, he was very good: In 1986 he led Argentina to a World Cup title, and during the late '80s he paced the moribund Napoli franchise to two Italian league championships. However, as talented as he was down on the pitch, he could never outrun the demons that tormented him, including addictions to alcohol and cocaine—the latter habit he likely picked up in the early '80s while he was with his first international club, Barcelona FC. Complicating Diego's life was the steady company of hangers-on who fed his ego and nurtured his love for fast times, too often while reaching into his pocket. While Maradona's is an interesting story, even for soccer-ignorant Americans, Burns's narrative lacks, well, soccer- -specifically, any description of what made Maradona so much greater than other players. Without this to complete the picture, the accounts of his repeated failings lack either context or interest. (24 b&w photos, not seen)