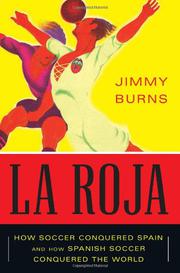 The story of the rise of Spanish soccer against a deeply divided political background.

In July 2012, the Spanish national men’s soccer team won the European Football Championship, making them the first team in the world to win three consecutive major tournaments. This victory, which occurred after the publication of this book, simply validates Financial Times senior writer Burns’ (Land that Lost Its Heroes: How Argentina Lost the Falklands War, 2012, etc.) narrative about Spain’s rise from its political maelstrom to become the pre-eminent force in global football. Like the rest of the world, Spain inherited soccer from Great Britain in the late 19th century; within a few decades, the sport supplanted bullfighting as the country’s chief passion, the one thing that could bring an often-divided people together. In the early and mid 1900s, Spain was divided ideologically between fascists and communists, between Spanish loyalists and Basque and Catalan nationalists, and between myriad competing views of Spanish identity. Most of these divisions were manifested in the country’s soccer culture as well, with teams such as FC Barcelona, Real Madrid and Valencia representing not only competing sporting identities, but political passions as well. But during the Spanish Civil War of the 1930s, the national team’s passionate style of play managed to bring Spain’s many factions together, if only for 90 minutes at a time. For decades, Spain underachieved on the global stage, until 2008 when they won the European Championship and then the pinnacle moment, 2010, when they claimed the World Cup title. Burns split his time growing up between England and Spain and is thus well positioned to tell this story, and he does so well, with a fine eye for tragedy and irony both political and on the pitch.

Spain’s dominance is remarkable, especially because of the long odds that the country’s history forced its players to overcome, and Burns rises to the challenge of telling this intertwined saga.