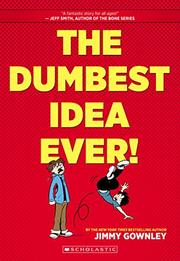 THE DUMBEST IDEA EVER!

The charismatic creator of the Eisner-nominated Amelia Rules! series recounts his beginnings as a cartoonist.

From the very first panel, Gownley’s graphic memoir is refreshingly different. He’s not the archetypal nerd, and he doesn’t retreat to draw due to feelings of loneliness or isolation. Gownley seems to be a smart kid and a talented athlete, and he has a loyal group of friends and a girlfriend. After he falls ill, first with chicken pox and then pneumonia, he falls behind in school and loses his head-of-the-class standing—a condition he is determined to reverse. A long-standing love of comics leads him to write his own, though his first attempt is shot down by his best friend, who suggests he should instead write a comic about their group. He does, and it’s an instant sensation. Gownley’s story is wonderful; his small-town life is so vividly evinced, it’s difficult to not get lost in it. While readers will certainly pick up on the nostalgia, it should be refreshing—if not completely alien—for younger readers to see teens interacting without texting, instead using phones with cords. Eagle-eyed readers will also be able to see the beginnings of his well-loved books about Amelia. He includes an author’s note that shouldn’t be overlooked—just be sure to keep the tissues handy.

Humble, endearing and utterly easy to relate to; don’t miss this one.