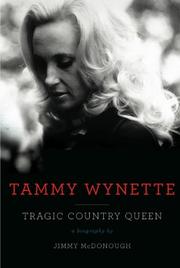 The gory details of the country vocalist’s life.

McDonough (Big Bosoms and Square Jaws: The Biography of Russ Meyer, King of the Sex Film, 2005, etc.), who wrote the bestselling Neil Young biography Shakey (2002), takes on the big-voiced, troubled thrush who logged 20 No. 1 country hits between 1967 and 1976. Born Virginia Wynette Pugh (1942–1998) and raised humbly in rural Red Bay, Ala., she was a headstrong, willful girl who broke out of the honky-tonks and regional radio to notch her first big singles, including the controversial, politically divisive anthem “Stand By Your Man,” under the tutelage of Nashville producer Billy Sherrill. (Music City’s studio milieu and Sherrill’s key role in it are chronicled in a richly detailed early chapter.) Wynette lived through five harrowing marriages, tormented relationships with four children, a multitude of health problems, two debilitating decades of addiction to painkillers and a bizarre, unsolved (and possibly trumped-up) kidnapping. McDonough is clearly smitten with his talented subject—he rhapsodizes over her recordings and pens several cringe-inducing “Dear Tammy” letters—but Wynette remains something of a cipher; one never senses that much existed below the surface besides an abiding neediness. Two of her husbands emerge as the book’s most compelling figures. George Jones, the alcoholic, unpredictable singer who was Wynette’s musical role model and third spouse, is depicted as a deeply flawed yet loving professional and romantic partner. Producer-songwriter George Richey, her fifth husband and Wynette’s manager for 20 years, is painted as a greedy, controlling hillbilly Machiavelli who hastened Wynette’s premature demise in 1998 through a combination of overwork and (illegal) overmedication. McDonough interviewed all but a few of the principals in the story—including the normally reticent Jones—and he gets some wonderful material from peers like Dolly Parton and Loretta Lynn. However, readers may remain uncertain about what animated Wynette’s powerfully performed music.

Wynette’s tortured history is forcefully told, but her essence remains a mystery.